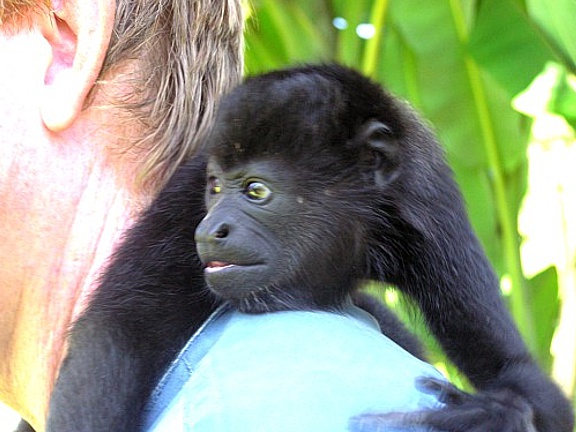 A MONKEY IN MY ARMS.

Seeing wild animals up close and personal is one of life’s most fulfilling experiences. People who have swum with dolphins come away with a feeling that they describe as being almost religious in nature.

Recently I have had several of these wonderful experiences thanks to the people at the Alouatta animal sanctuary in Chiriqui. 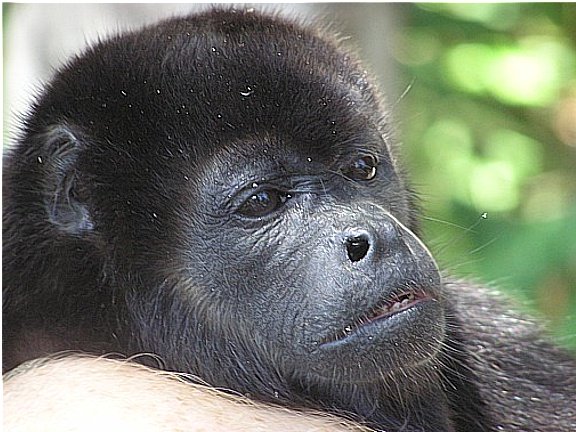 The main purpose of my visit was to see one particular howler monkey named Maisie. On May Day 2007 (hence the name) a tiny orphaned howler monkey was  given to Paradise Gardens in Volcancito. Maisie’s mother was most probably killed for bush meat.

At Alouatta lodge in Chorcha, The Walker’s also had a rescued howler called Yahoo. Soon Maisie and Yahoo became friends and spent time together in their secure prerelease enclosure at Alouatta. Soon some wild howlers came into the compound and one, who was named Big Boy, seemingly mated with Maisie. On the 19th of November 2009, The Walkers told the Sabans that Maisie had given birth to their first Howler grandchild, called Novey. Maisie and Yahoo are credited as being the first documented releases of captive raised Howler monkey’s in Panama. 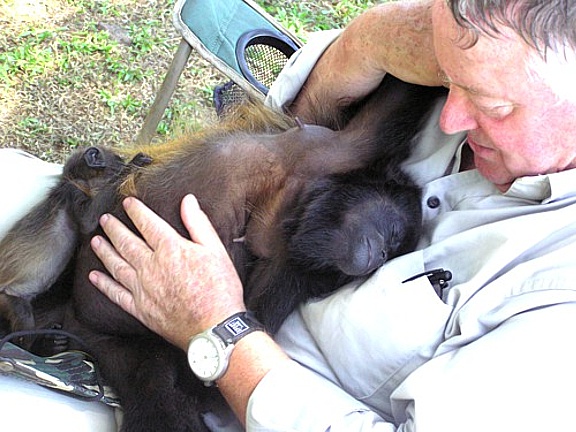 Yesterday I drove up a rough mountain road 20 minutes east of the City of David. The Alouatta (latin for Howler monkey) sanctuary is the brainchild of expat couple Steven and Michelle Walker. As we parked our truck beneath some swaying palm trees Steven Walker approached us with a troop of howler monkeys in tow. These small black and wonderful creatures were soon climbing all over myself and my two companions Susan and Felipe Lawson. Steven assured us they were friendly although I had a few concerns about their mouth full of tiny sharp teeth.

Sitting under some palm trees just outside the lodge British born Steven explained how his own life-changing experience had led him to setting up this habitat for the howler’s. While living in Australia as a farmer, Steven’s close friend of the same age, developed dementia and within a relatively short period of time, went from an agile, fit young man to a physically and mentally broken person. After his friend Basil’s death Steven was driving along a highway and saw a Volkswagen billboard that stated: “Life is not a test-drive.” For Steven the writing was literally on the wall.

Sitting in a camp chair at Alouatta, Maisie, with baby Novey firmly attached, approached me and climbed up onto my lap. This was the second time in my life I had come close to a howler and her baby. Ten years previous in Nicaragua I had come across a troop of howler’s as they crossed a deserted country road. A mother and baby paused some 100 feet away and made eye contact with me. I sent out my best telepathy message of, “I mean you no harm.”  The mother’s eyes were not fearful, more a look of deep curiosity. We must have stared at each other for 30 seconds or more and then the males of the troop hurried her off. Here in the mountains of Chiriqui, Maisie, had stretched herself out in my lap. Her small black head nestled under my chin, I gently stroked her stomach and I could feel her relax into my arms. There is a wonderful feeling when an animal trusts you this way. Steven said Maisie didn’t warm to everyone so I was fortunate.

Then as the warm afternoon sun filtered through the trees, Steven looked across and said, “look at that, Maisie’s fallen asleep.” 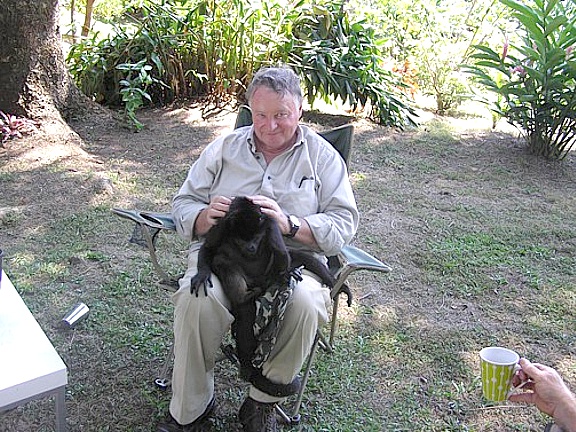 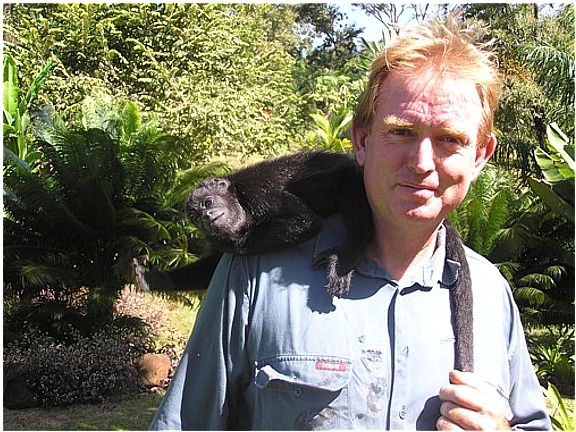 With his New Zealand born wife Michelle and their two children, Rebecca and Gareth they searched through 37 countries before settling in Boquete. Steven worked with local wildlife enthusiast Paul Saban, doing landscaping work at The Saban’s Paradise Gardens sanctuary in Volcancito. A year and a half ago he bought the 40 acres that is now Alouatta Lodge and started on his dream.

Steven and Michelle have done a remarkable job of transforming this mountain jungle into one of the most beautiful and peaceful places in all of Panama. Don’t take my word for it. Just walk out onto Steven’s wooden viewing deck and look down the valley to the coastline of Boca Brava – if this doesn’t take your breath away, nothing in life will.

Alouatta Lodge is not a zoo, there are no animals in cages for people to look at. The idea is that animals, Parrots, Capuchins, Sloths, are cared for just as long as is necessary and then they are released into the wild. Steven and Michelle would like to expand their lodge and buy the land next door. They need investors to help this become a possibility.

DIRECTIONS:The turn off to the Lodge is exactly 15 miles past the David Transito stop. When you see a sign on the right saying: Ganaderia Las Vueltas, the Alouatta turn off is just a hundred yards further on the LEFT. (there will be a sign within a few weeks) 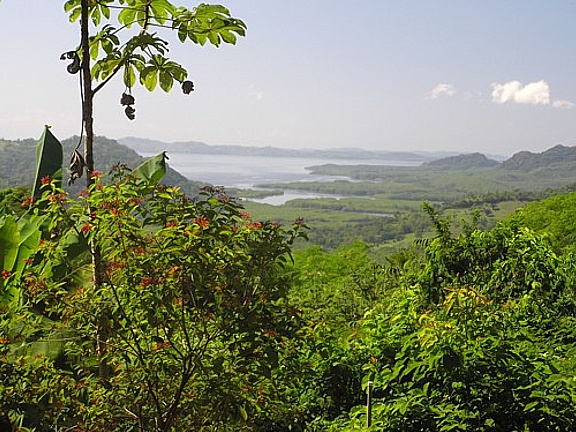